Early theories of motivation were very much influenced by the behaviorist movement in psychology, centering on extrinsic rewards and punishments. Later, many theories balanced this with a greater focus on intrinsic motivation. One of the better-known theories is Maslow’s hierarchy of needs, which identifies tiers of motivation in which higher-level needs become more important when lower-level needs are met: 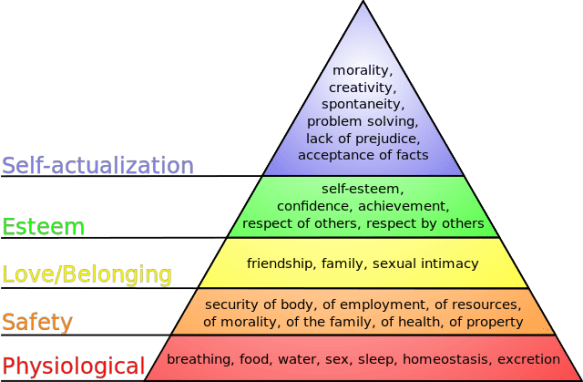 Hertzberg’s two-factor theory separates motivation into satisfiers and dissatisfiers. Employers tend to concentrate on creating satisfiers (e.g., incentive programs) and miss or ignore dissatisfiers (e.g., lack of transparency in decision-making). As a result they become baffled when, despite increasing rewards, employees become more dissatisfied. There is at least one study that suggests this theory is also important in student motivation (DeShields, Kara & Kaynak, 2005). Providing quality leisure facilities (a satisfier) may not cancel out the negative effect of a dissatisfier such as not keeping students informed of policy changes.

Dan Pink presents a good summary on the latest science-based thinking on motivation of knowledge workers. You can view a version as a conventional TED talk – Dan Pink, “The Puzzle of Motivation”:

or in the increasingly popular illustrated version, Dan Pink’s talk at the RSA:

I recommend viewing and comparing both. Do you think the visual reinforcement helped you learn more from the talk?
An important point he makes is that we need to get past the “lazy dangerous ideology of carrot and sticks” that still dominates a lot of management and educational thinking. Motivation for the knowledge worker builds on intrinsic motivation, which organizational culture can either enhance or suppress.