“Those who don’t know history are doomed to repeat it.”
― Edmund Burke

This well-known quote is certainly true when it comes to the history of educational technology. I recently participated in a NERCOMP event that considered the use of tablet computers in education. The opening presentation touched on some failures, specifically a spectacular failure of a $1B iPad program for Los Angeles schools (see this LA Times article). This is not the only example.

The iPad is one in a long series of technologies to be promoted as something that would revolutionize education. For example, Thomas Edison once said in 1922, “I believe the motion picture is destined to revolutionize our educational system and that in a few years it will supplant largely, if not entirely, the use of textbooks”. Since then, many technologies have been hyped and adopted without a revolution occurring (see October, 2012 post).

The problem with this and similar initiatives is that it concentrates on getting the new technology into the learning environment without first creating a strategic plan for how the technology will be used and how the users (particularly the teachers) will be supported. The assumption is made that all that is needed is the new technology and everything will work by some sort of magic. Prior to the recent focus on tablets, many schools and colleges adopted policies requiring students to obtain a laptop but had no strategies for how they were to be used in classes. As a result some instructors have banned laptops from classes, seeing them as more of a distraction than a help (e.g. Laptops vs. Learning – Washington Post)

Fortunately, the NERCOMP event did include some success stories. A professor from Baypath University described how he was initially a skeptical and unwilling participant with little technical experience but now is an enthusiastic supporter of the use of tablets in the classroom. The key ingredient of the success story was the training provided alongside the adoption of tablets. The extensive training, provided by edtechteacher, focused on what students can do with the tablets in class instead of providing details about the technology or all the apps available. Seven guiding principles aimed at promoting active learning with the technology were adopted:

The initially skeptical professor said the experience has transformed his perspective on teaching and sees the changes as a dramatic improvement. He is often amazed by what his students do with the technology. 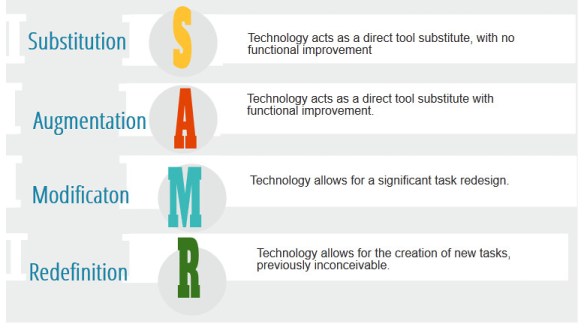 Key to this approach is focusing on the higher levels of the Substitution Augmentation Modification Redefinition Model, which defines levels of technology use in teaching and learning. The most basic and most used level is substitution, where technology is used to perform the same task as was done before the use of computers. Thus, the instructor uses PowerPoint to replace acetate slides and chalkboards and the students use laptops to replace paper notebooks. The highest level is redefinition, where technology results in new learning tasks that were previously inconceivable.

The approach to learning, not the type of technology, is the key. Training should be focused on facilitating learning outcomes not merely technology features and operation. This is the way to change history not repeat it.

The Human Touch by Lowell Monke, Education Next, Fall 2004.

Research on in class use of laptops and other devices. The Teaching Center Journal, Washington University in St.Louis, Sept, 2014.