There is no shortage of new technologies available to educators. However, from its earliest days’ educational technology has often failed to live up to the high expectations given to it. For example, in 1922 Thomas Edison proclaimed, “I believe the motion picture is destined to revolutionize our educational system and that in a few years it will supplant largely, if not entirely, the use of textbooks.” The Gartner group identified the “Hype Cycle” for emerging technologies (see figure 1), which is of relevance here. The hype cycle suggests that new technologies tend to get overhyped based on their assumed potential. This leads to disillusionment when a lack of success at scale relevant to the hype becomes apparent. 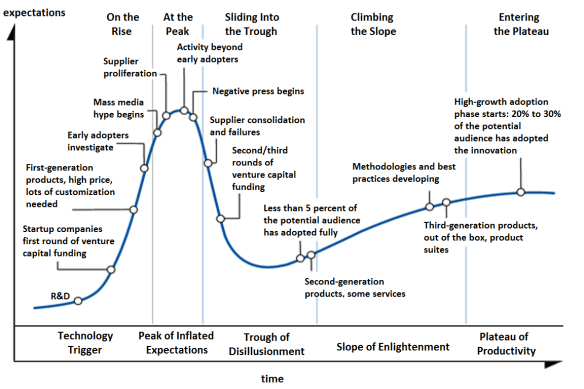 After the disillusionment, a second wave of the technology often arises accompanied by new methodologies and practices that quietly begin to make a real impact over time. Although motion pictures did not supplant textbooks or radically transform education as predicted, they have over time become an important tool for educators.

The skills involved in this second wave research and development are probably undervalued, but no less important in making a technology successful. The problem here involves not just making a technology work in a controlled environment. It involves making it work with clear evidence of effectiveness in complex organizational structures that are often resistant to change.

We have over the past decade seen an increasing number of technologies move up the hype cycle (artificial agents, adaptive tutors, educational games, MOOCs, interactive classrooms, virtual worlds, learning analytics, social media, learning management systems). Often these are seen as isolated “silver bullet” solutions that on face value have potential to transform education. They are not always viewed in the context of the systems of education we currently have, or the ones we want to create. The problem is not a lack of new ideas or technologies; it is lack of methodologies and cultures for integrating them into new designs of educational systems. These are the important problems being solved by people who are working on the second wave without any hype.