I recommend four though-provoking books about education and learning. The first two are relatively light reading that anyone with an interest in learning should enjoy. The second two are more aimed at people working in higher education.

The Rise of Superman: Decoding the Science of Ultimate Human Performance

This book deals with extreme performance in extreme sports and how a maverick group of informal learners has taken what is possible to level that was once thought impossible. The stories of the extreme sportsmen (skateboarders, skiers, snowboarders, kayakers, climbers and surfers) are entertaining in themselves, but there is science woven through the stories and in particular, a focus on the concept of flow – a mental state that not only motivates, but also facilitates performance beyond what a normal mental state could achieve.

What School Could Be: Insights and Inspiration from Teachers across America

The second book deals with the state of the US education system and the need for its reinvention. I first came to the US in 1998 at a time when the state of Florida was starting to implement frequent standardized testing across K-12. This troubled me as I had just arrived from Singapore where the government had realized their system of intensive testing was just creating “exam-smart” students, when what they needed to create – for the new industries they were trying to attract – was creative problem solvers. It is ironic that many of the consultants helping them move in a new direction were coming from the US.

It seems from this book that twenty years of “teach to the test” has created great damage, and there is a particularly depressing account in the book of an interaction with a Florida official. The author, Ted Dintersmith, is a successful venture capitalist who has produced an award-winning documentary about education: “Most Likely to Succeed”. The book recounts his fifty-state tour meeting with teachers, students, administrators, parents. As the title suggests, the book is ultimately optimistic and highlights a number of places where grass roots efforts are meeting with success.

Learning Online: What Research Tells Us About Whether, When and How

There is a lot of misinformation about online learning – what it is and its relative effectiveness compared with “traditional learning”. There are lots of serious reviews and studies out there and this book does a good job of distilling the information and clearing up the terminology. In particular, it has a message that I have to continually emphasize:

“a major message of the book is that student outcomes arise from the joint influence of implementation, context, and learner characteristics interacting with technology— not from technology alone.”

Learning science generates much useful information that is mainly communicated to other learning scientists. This is book is a good attempt to distil the science into seven practical principles that instructors can use in the design and operation of their instruction. Each one is illustrated by a case study that includes a description of practice before and after the implementation of the principal. It is mainly aimed at higher education and this book, or one like it, should probably be given to every new instructor as required reading.

At the end of the semester we hosted a get together of people from across ASU and the local community who are interested in the potential of augmented and virtual reality in education. I started the evening with a talk entitled “The History and Future VR/AR in Education and Training”. The last time I gave a presentation on virtual reality was in 1993 when there was a wave of interest in the concept. Interest soon died, but in a time of much more sophisticated graphical processing power, it has now been reignited. It has also entered the commercial space with products from companies such as Oculus.

The theme of my presentation was almost the same as the one I gave in 1993, which was that there is a history to VR and in this history, the most successful example of its continuous use in learning is flight simulation. The success of flight simulation in learning is not only due soley to the technology, but to  the whole process that surrounds it; a process that parallels some influential theories of learning (cognitive load and deliberate practice).  You have to have the right preparation prior to entering the simulator and the learning requires the appropriate scenario selection, observation, feedback, all under the control of an expert human instructor.

After the talk, we held a reception featuring several hands-on demonstrations of VR uses in learning. You can see some of the pictures from the event and more information about the demos here.

We held the third iteration of our ASU learning Innovation Showcase last month, our biggest ever event. The showcase demonstrated innovative work in teaching and learning occurring at ASU (voted the USA’s most innovative university for the last three years) and to connected the participants in new collaborations. The event again garnered great reviews and included all the major ASU centers and labs doing research in this area. We also increased the number of visitors from outside ASU.

We filled a large event space with seventy-none diverse presentations, which included two demonstrations of educational uses of virtual reality. Over 300 people attended.

The list of presentations is available here, where will also find more photos and a video of the event.

In the past decade, interest has emerged in the large amounts of data generated by the increasing use of technology in education and what we can learn from it. Communities of researchers have arisen around the fields of learning analytics and educational data mining to look for patterns in various types of digital activity. Learning Management Systems can track every click a student makes from the time they enroll to the time they leave an educational program using it. Artificial Intelligence (AI) techniques have been developed to analyze the specific online interactions and adapt learning experiences based on this.

Learning analytics research is often purely quantitative in approach and does not provide the full context surrounding student behavior. We can show “what” is happening (e.g. large drop-offs in participation in MOOCs), but not “why” it is happening. The “why” is important if we are to understand the motivations of students and how we can best design interventions to assist them. Artificial intelligence (AI) approaches can analyze how effectively and efficiently students move through a course, but not how satisfied they are with the experience. There is a link to research in social networks, which may lead to a richer set of interventions to support student success. Data science should be complemented with the qualitative methods of social science to help get to deeper issues involved in student interactions with educational experiences.

ASU’s online learning support division EdPlus has developed an Action Lab to set up the data collection infrastructure and coordinate the research expertise to make progress in this relatively new area. It is providing a unique angle to this work by integrating social scientists and data scientists with the goal of using data not only to improve the persistence and course completion of students, but to understand their motivations and how they can be best supported in long-term achievement. 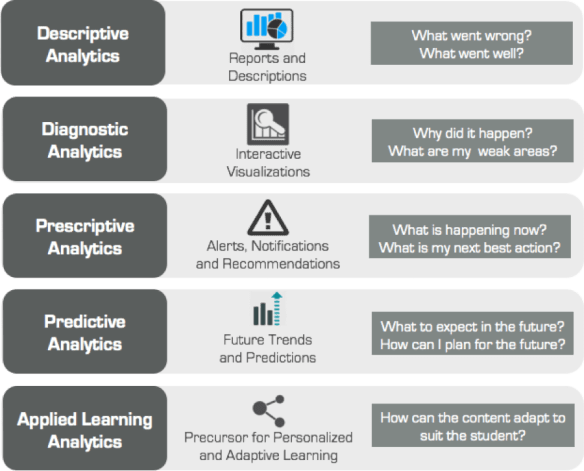 Over the summer, I participated in the Realities 360 conference. This was a hands-on conference looking at how developing augmented (AR) and virtual realities (VR) can impact learning. Most of the participants were from a commercial rather than academic backgrounds, which is always makes for an interesting change of perspective. Here is a short clip of Maxwell Planck, one of the main presenters, that will give you a flavor of what was discussed:

Along with the presentation there were lots of hands on demos and workshops using various tools.

Although virtual reality is currently at a high level of hype, the concept in various forms has been around for some time ( see this article on the history of VR ). This article dates the concept back to 1930’s science fiction. It is possible to trace the concept even further back than this article does to the use of immersive panoramic paintings.
This picture illustrates the Battle of Borodino panorama created in Moscow in 1911:

There is also an earlier example in the US at the Gettysburg Museum, which attempts to give a sense of the last day of the civil war battle that took place there.

What was most revealing for me at the conference, was not VR, but the potential for augmented reality, which enables the projection of information and animations on a view of the real world. This is illustrated by a recent demo at the Apple developers conference, which introduced ARKit to app developers. Although initially this will probably be most used for entertainment apps, there is huge potential for creating a variety of learning related apps. I am looking forward to seeing how this develops when it becomes widely available.

Over the last year, I have had the pleasure of working with Rod Roscoe and Scotty Craig on an edited book project. Rod and Scotty are professors in the Human Factors Engineering program at ASU’s Polytechnic school. The resulting book “End-User Considerations in Educational Technology Design” lays much of the foundation for the definition of the new transdisciplinary field of learning  engineering covered in last month’s post.

You can find out more about the book and its chapters on the publisher’s web site. The book will be released in July.

All around us we see the benefits of a well-developed engineering profession translating the discoveries of modern science into all sorts of useful systems. Learning science is constrained by the fact that we do not have a well-developed equivalent of engineering to compliment and exploit the science. It may be part of the reason why despite producing decades of research in learning,  many classrooms are little different from previous centuries in both the design and the activities that take place in them. (see previous post).

I have heard others make this claim and my answer was always that we have, in the profession of instructional design, the equivalent of the learning engineer (see previous post). The USA is unique in having developed a discipline of instructional design, and many colleges of education produce graduates in this field that are in high demand. However, I have begun to believe that this is not enough. We need a new kind of professional that has skills that traditional colleges of education are not able to provide.

Instructional design was initially inspired by many of the early developments in software engineering. It has not developed as extensively as software engineering; it has been bounded by not being truly cross-disciplinary (Douglas, 2006). It needs to embrace a stronger technological component and have a connection to the emerging field of design science. It needs people skilled in the design of sociotechnical systems, not just the design of individual pieces of educational technology. This involves transforming traditional instructional design by integrating ideas from outside educational colleges such as software engineering, human systems engineering and design schools.

Design thinking has moved away from process heavy models focused on the systems, to models focused on the user experience (see previous post) with systems and the context in which they are used. It was the development of a design-oriented culture focused on user experience that helped to differentiate Apple in the technology sector. There is scope for innovative universities to create new educational programs in the field of learning engineering, a field focused on the conversion of learning research into successful large scale practice. A field that does not just integrate new technologies into existing models of education, but that seeks to transform the whole system. A field that can bridge engineering, education and design into a transdisciplinary expertise that will finally bring learning into the 21st century.